Getting Started with mangOH Yellow

This guide teaches you how to get started using the mangOH Yellow development board with Atmosphere. This includes creating your first project, putting the project’s firmware onto the board, getting the board registered to Atmosphere, and having its data displayed on a dashboard.

This guide demonstrates how to build a simple project that reads the mangOH Yellow’s GPS location, sends the data to the cloud over Wi-Fi, sets its geolocation position on the cloud, and displays the device’s location on a map on your dashboard.

If you'd like to see the complete demo before attempting this guide, the project created here is available in Atmosphere IoT Studio's Demo Projects section as the mangOH Yellow GPS Demo. Simply open the project to check it out and get started.

Users are expected to have a moderate understanding of working with a mangOH Yellow and embedded Linux systems prior to use with Atmosphere. It's recommended to read the Sierra Wireless Resources for the mangOH Yellow for information on configuring the board and accessing its default user credentials.

Although there aren’t any specific software requirements for using the mangOH Yellow with Atmosphere itself, you’ll need to use the terminal of your choice to interface with the board and SCP client of your choice to transfer files to it.

The first aspect of building this sample project is adding elements to the Embedded tab to create the project’s embedded firmware. This involves setting an interval to read embedded data, and to tell the interval to read the board’s GPS location.

That wraps up the first aspect of the project within the Embedded tab. To this point, an interval has been set that will run every second, and when run will read the mangOH Yellow’s GPS data. 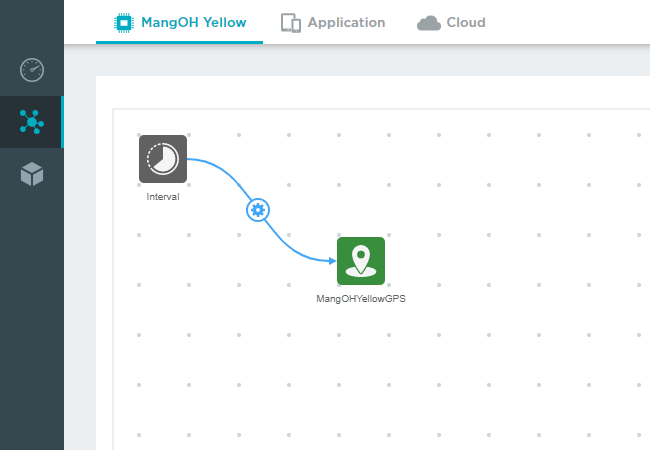 The second and last aspect of building this sample project is enabling it for cloud connectivity. This is done on both the Embedded and Cloud tabs.

That’s all for creating the project! With the added cloud connectivity, the project will send the GPS location data from the Embedded tab to the Cloud tab through a Device Event element, where it’s connected to a cloud meta element to set the mangOH Yellow’s geolocation on Atmosphere.

Prior to putting the project firmware on the mangOH Yellow, its Wi-Fi connectivity needs to be enabled and configured. The mangOH Yellow doesn’t have its Wi-Fi enabled by default, so we need to configure it with your network credentials beforehand.

The following process will initialize the onboard Wi-Fi:

When finished, this will initialize the Cypress Wi-Fi driver on the mangOH Yellow, connect to the specified Wi-Fi network, and obtain an IP address. After this, you can run ping google.com to test receiving a response and verify your device is connected.

This process must be run each time the mangOH Yellow boots. If the board is rebooted, the Wi-Fi will revert to being disabled.

Step 5 of 7: Put Firmware onto the mangOH Yellow

With the project complete and Wi-Fi connectivity enabled, your mangOH Yellow is ready to have the project firmware put onto it and then running the file as an executable application.

Prior to putting firmware onto the mangOH Yellow, ensure you have the following setup configuration:

With setup complete, you can program the mangOH Yellow:

Once the download/transfer is complete, the mangOH Yellow has the project zip file on it, which hasn’t been unzipped and can’t yet be run. Steps to run the application are included below as part of registering the mangOH Yellow.

Step 6 of 7: Register the mangOH Yellow to Atmosphere

To run an Atmosphere application and register the mangOH Yellow:

Once you’ve created an API token, it then has to be provided once you run the app.

At this point, the application is running and the mangOH GPS data is sent to Atmosphere through the Internet connection maintained on the mangOH Yellow.

Now that data is being sent to Atmosphere, let’s view it through one of the many dashboard widgets available. In this guide we’ll use a device map widget to map the mangOH Yellow’s location. We’ll do this directly on the device’s console page, so click on the newly-added mangOH Yellow to enter its console.

Once added, the GPS data should populate the device map with the location of the mangOH Yellow. As new GPS data is sent each second, the position of the device will update on the map if the device’s location changes.

Getting Started with ESP32

Getting Started with MAX32630 Feather