Getting Started with PIC-IoT WG

This guide teaches you how to get started using the Microchip PIC-IoT WG development kit with Atmosphere. This includes creating your first project, programming the project’s firmware into your PIC-IoT WG, registering the device to Atmosphere, and having its data displayed on a dashboard.

This guide demonstrates a simple project that measures temperature and light data from the board, then sends it to the cloud over Wi-Fi.

The project in this guide doesn’t use IoT Studio’s Application tab to build an app interface and since the PIC-IoT WG is registered to Atmosphere over Wi-Fi rather than BLE, the Atmosphere IoT app is not required here.

This opens a new project in IoT Studio.

The first aspect of building this sample project is adding elements to the Embedded tab to create the project’s embedded firmware. This involves setting two intervals to read embedded data, and to tell the interval to read the board’s temperature and ambient light sensors.

That’s all for work in the Embedded tab. To this point, two intervals have been set that will run at five seconds and half a second respectively, and when run will read the ambient temperature and ambient light data from the PIC-IoT WG’s onboard sensors. The Embedded tab canvas should resemble the following image: 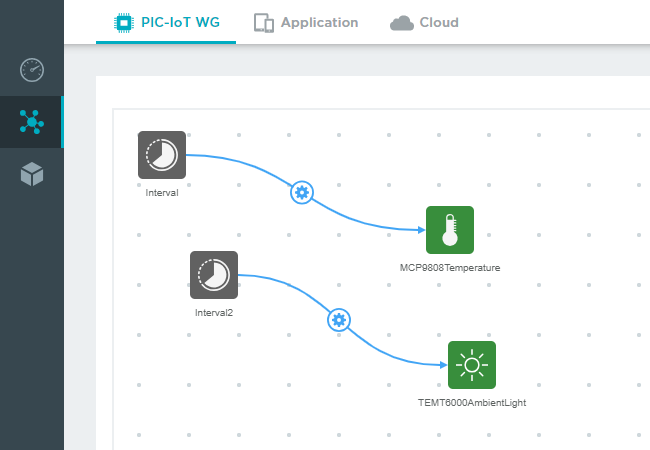 The next aspect of building this sample project is enabling it for cloud connectivity. This is done on both the Embedded and Cloud tabs.

That’s all for creating the project! With the added cloud connectivity, the project will send the ambient temperature and ambient light data from the Embedded tab to the Cloud tab through two Device Event elements, where they’re connected to two cloud storage elements to store each dataset on Atmosphere.

Step 4 of 7: Compile the Project

Once the project is finished, it needs to be compiled. Compiling readies the entire project’s source code for deployment.

Step 5 of 7: Program Firmware into the Device

Prior to programming, ensure the device is connected to the computer via USB. It should display as a mass storage device. Then you can program your board:

The blue LED will then turn on, followed by the yellow LED. This indicates the device is programmed, and can now be connected to Atmosphere.

Step 6 of 7: Register the Device

With firmware installed, the device can now be recognized and connected to Atmosphere. Prior to connecting a device, ensure your Atmosphere IoT Agent is running in your system tray. This is needed to check your computer’s communication ports for a device it recognizes, which will find the PIC-IoT WG.

To register the PIC-IoT WG:

The device is now registered to Atmosphere and is displayed on the page.

Now that the device’s data is sent to Atmosphere, let’s view it through one of the many device dashboard widgets available. In this guide we’ll use a data glance to display light levels, and a data graph to chart the temperature reading. We’ll do this directly on the device’s console page, so click on the newly-added PIC-IoT WG to enter its console. 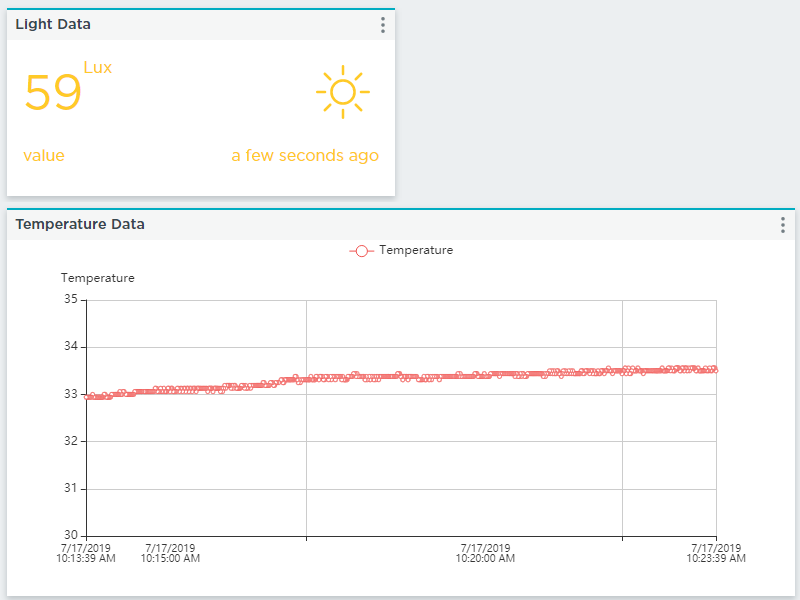 If you're interested in a slightly more advanced version of this project, try out the PIC-IoT WG Onboard Sensor Demo available in Studio's Demo Projects section. This demo is similar to the project used in this guide, but also includes setting a status condition for the ambient light value in the Cloud tab, that if the light value exceeds a set limit an alarming state is triggered.

Getting Started with OKdo E1