Getting Started with Rapid IoT

This guide teaches you how to get started using the NXP Rapid IoT with Atmosphere. This includes creating your first Rapid IoT project, programming the project’s firmware into the Rapid IoT, registering the device to Atmosphere, and having its data displayed on a dashboard.

This guide demonstrates a simple project that reads the hardware’s ambient light sensor once per second, which displays that information on the Atmosphere IoT app using an analog meter, and sends the data to the cloud.

This opens a new project in IoT Studio.

The first aspect of building this sample project is adding elements to the Embedded tab to create the project’s embedded firmware. This involves setting an interval to read embedded data, and to tell the interval to read the Rapid IoT’s ambient light sensor.

That’s all for work in the Embedded tab. To this point, an interval has been set to run once per second after the project opens, and when run will read the ambient light sensor. The Embedded tab’s canvas should resemble the following image:

Step 3 of 9: Create the Project’s Interface

The second aspect of building this sample project is adding elements to the Application tab to create the project’s visual component.

Click the Application tab to move to the application area of the project. Notice how the Element Toolbox has changed, and that the coupled BLE characteristic element is displayed on the canvas.

This is all that needs to be done for the project’s interface. To this point, an interval has been set that will read the BLE characteristic value once per second, which will display the light sensor value on the analog meter. The Application tab’s canvas and interface should resemble the following images:

The last aspect of building this sample project is enabling it for cloud connectivity. This is done on both the Application tab and Cloud tab.

That’s all for creating the project! With the added cloud connectivity, the project will send the light sensor value from the Embedded tab to the Application tab (where it’s displayed on the mobile app’s interface), which then uses a Device Event to send it to the Cloud tab, where it’s connected to a cloud storage element to store the data on Atmosphere.

Step 5 of 9: Compile the Project

Once the project is finished, it needs to be compiled. Compiling readies the entire project’s source code for deployment.

button in the project options menu on the top-right of the screen. You’ll see a loading message on the screen, and will be notified when the project is compiled.

Step 6 of 9: Program Firmware into the Rapid IoT

Prior to programming a Rapid IoT, ensure you have the following setup configuration:

To put the Rapid IoT into programming mode, perform the following steps:

With setup complete, you can program your Rapid IoT:

When the lights stop blinking, programming is complete and the Rapid IoT is programmed with the project’s embedded firmware. The Rapid IoT will reboot itself and no longer display as a mass storage device, and upon startup the project is loaded on the device.

Step 7 of 9: Register the Device

With firmware installed, the Rapid IoT can now be recognized and connected to Atmosphere. From here, open the Atmosphere IoT app on your mobile device. You’ll use the mobile app to both register the device and eventually view the label data on the project’s interface.

To register a device:

The device is registered to Atmosphere and displayed on the page.

Step 8 of 9: View the Project Interface

Each registered device has its own dedicated console page, which displays its information and is where you access the device’s interface to interact with it. Select your newly-registered device in the Devices area to access its console.

The interface created in Studio’s Application tab is available on a device’s dashboard to interact with it. As long as the device is powered on and connected to Atmosphere, it can be interacted with.

button at the top of the screen. This opens the project interface from within the Atmosphere IoT app.

The project’s interface displays the light sensor’s value on the analog meter, which updates once per second.

Now that the data is sent to Atmosphere, it can be viewed through one of the many device dashboard widgets available. In this guide an data gauge widget can be used to display the light sensor’s value on the Dashboard similar to how it’s presented on the mobile app’s interface.

Like the analog meter on the app interface, the light sensor value is displayed on the data gauge widget. 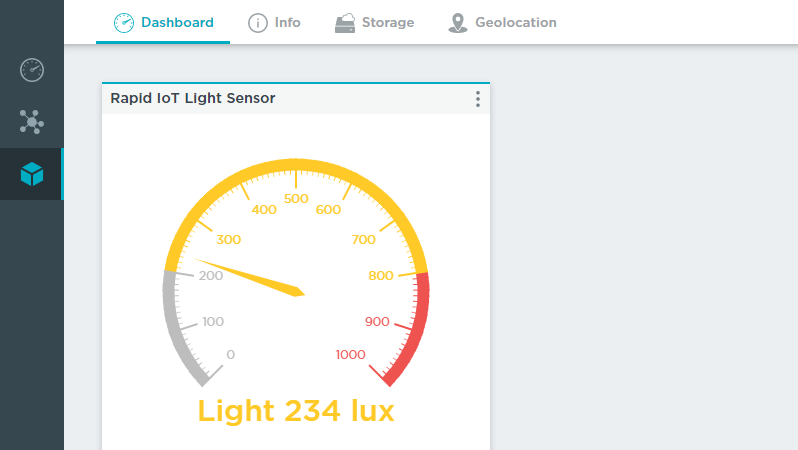 Now that you’ve created your first Rapid IoT project, you can explore more of the kit’s features, including creating projects that use the device’s display.

Getting Started with Raspberry Pi 4