Getting Started with Raspberry Pi 4

This guide teaches you how to get started using the Raspberry Pi 4 single-board computer with Atmosphere. This includes creating your first project, putting the project’s firmware app image into your Raspberry Pi, getting the computer registered to Atmosphere, and having its data displayed on a dashboard.

This guide demonstrates how to build a simple project that reads the computer’s CPU temperature and sends the data to the cloud.

If you'd like to see the complete demo before attempting this guide, the project created here is available in Atmosphere Studio's Demo Projects section as the Raspberry Pi CPU Temperature Demo. Simply open the project to check it out and get started.

The Raspberry Pi can be operated however you choose, be it with a standard desktop setup or headless. Either setup will work without issue with Atmosphere.

Users are expected to have a moderate understanding of working with a Raspbery Pi and embedded Linux systems prior to use with Atmosphere. It's recommended to read the official Raspberry Pi documentation beforehand for information on configuring the computer and usage details.

Navigate to Atmosphere Studio from the side menu. When you visit Studio for the first time in a session, you are brought to the Studio Projects screen.

This opens a new project in Studio.

This guide walks through the step-by-step process to perform actions in Studio, but doesn't cover the in-depth aspects of Studio itself. To learn more about using Studio, its areas and features, and Studio elements, visit the Atmosphere Studio section.

The first aspect of building this sample project is adding elements to the Embedded tab to create the project’s embedded firmware. This involves setting an interval to read embedded data, and to tell the interval to read the computer’s CPU temperature.

That wraps up the first aspect of the project within the Embedded tab. To this point, an interval has been set that will run every second, and when run will read the Raspberry Pi’s CPU temperature. 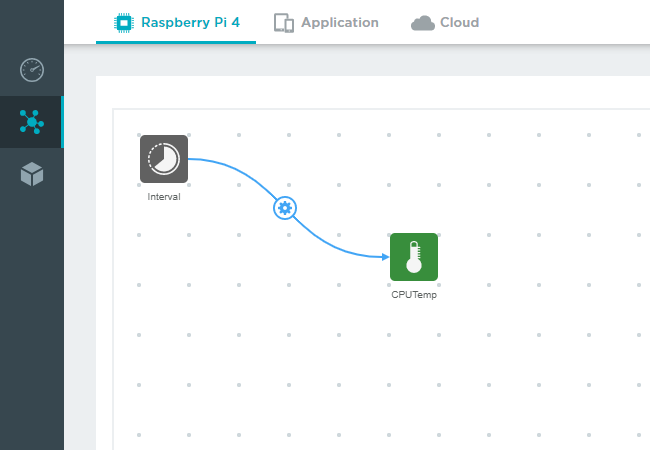 The second and last aspect of building this sample project is enabling it for cloud connectivity. This is done on both the Embedded and Cloud tabs.

That’s all for creating the project! With the added cloud connectivity, the project will send the temperature value from the Embedded tab to the Cloud tab through a cloud event element, where it’s connected to a cloud storage element to store the data on Atmosphere.

Step 4 of 6: Put Firmware onto the Raspberry Pi

With the project complete, your Raspberry Pi 4 is ready to have the project firmware put onto it. This involves putting a project’s app image file onto the Raspberry Pi and running the file as an executable application.

Prior to putting an app image onto a Raspberry Pi 4, ensure you have the following setup configuration:

With setup complete, you can program the Raspberry Pi 4:

Step 5 of 6: Register the Raspberry Pi to Atmosphere

To run an Atmosphere application and register the Raspberry Pi 4:

Once you’ve created an API token, it then has to be provided once you run the app image.

At this point, the application is running and the CPU temperature data is sent to Atmosphere through the Internet connection maintained on the Raspberry Pi.

Now that data is being sent to Atmosphere, let’s view it through one of the many dashboard widgets available. In this guide we’ll use a data graph widget to chart the temperature data. We’ll do this directly on the device’s console page, so click on the newly-added Raspberry Pi 4 to enter its console. 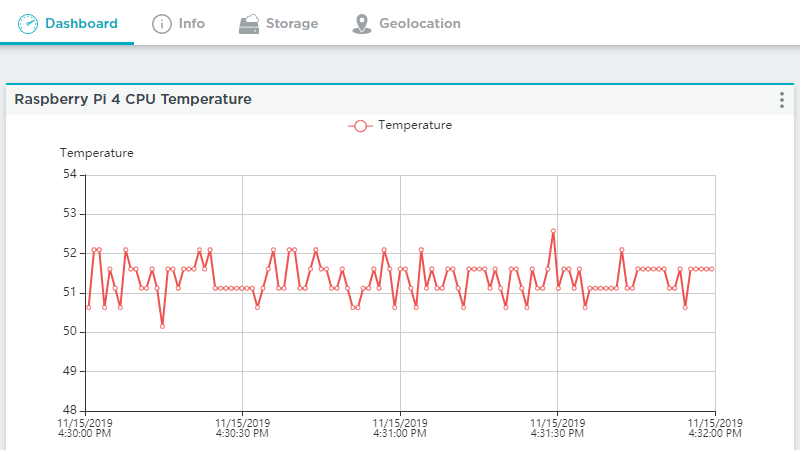 Getting Started with Rapid IoT