Using the Atmosphere IoT Agent as a Zigbee Gateway

This guide demonstrates how to create a Zigbee mesh network that uses a computer running the Atmosphere IoT Agent as the network gateway, which forwards data to Atmosphere. This involves creating an Atmosphere project for an end node device that reads and sends data, and uses a centralized coordinator device that receives that data, which via the agent has it sent to Atmosphere.

The basic premise behind creating this network is demonstrated in the diagram below: 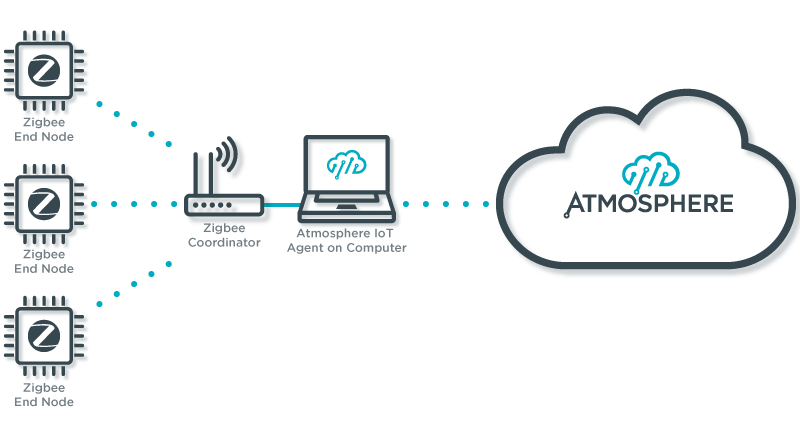 A Zigbee network consists of two types of devices: end nodes and coordinators. End nodes are end devices on the network that broadcast data, and any number of end node devices can be supported within the network. Coordinators are central devices that create and host the Zigbee network, and receive data from any end nodes connected to the network. There can only be one coordinator device per network on Atmosphere. Data received by the coordinator device can then be sent to Atmosphere.

In the guide you’ll build an application that includes one end node device and a coordinator device. The end node records integer data and increments it, and broadcasts it to the Zigbee network where the coordinator device receives that data. The agent operating as a gateway for the network then forwards the data to Atmosphere, where it’s displayed on a data glance widget on the device console’s dashboard.

For the purposes of this guide we choose the Arduino Due as our end node device, but any Atmosphere-supported hardware that is compatible with the XBee3 Zigbee Mesh Kit could be used to build this type of project.

Setting up the hardware involves connecting pins from an XBee Grove Development Board to the Arduino Due. The board includes a left, bottom, and right column for pins. For reference, this XBee3 pinout diagram can assist with identifying pin locations: 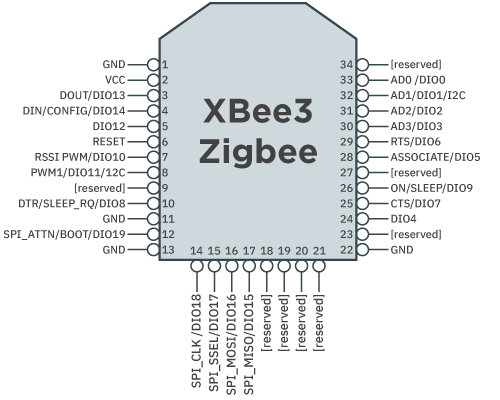 The finished setup should resemble the following image: 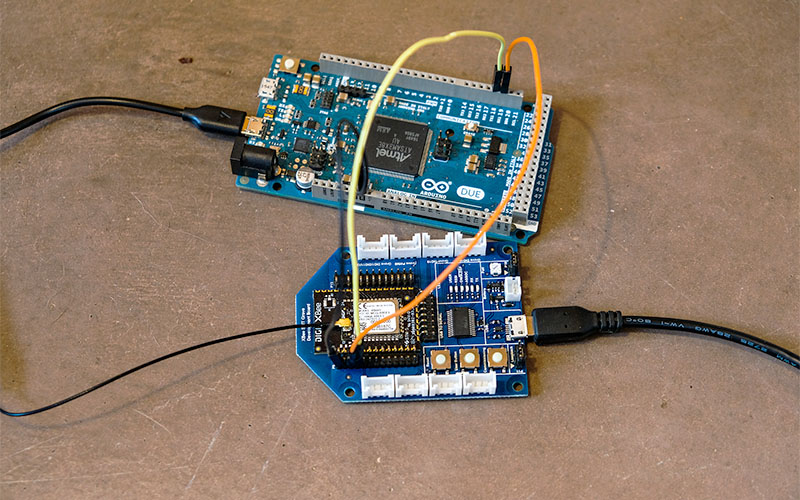 The listed pinout connections are based on use with the Arduino Due. If you're using a different device, be sure to connect the XBee pins to the corresponding pins for that board.

The Atmosphere IoT Agent is a local application that runs in the system tray and acts as an intermediary between the computer’s connectivity protocol drivers and the browser running Atmosphere, and is used here to assist in programming the device and connecting it to Atmosphere. While the agent is running, a device with Atmosphere firmware installed on it can be registered to Atmosphere directly without the assistance from an additional connection like BLE or Wi-Fi if it’s connected to your computer.

Step 1 of 8: Configure the Atmosphere IoT Agent as a Gateway

The first thing needed for creating this Zigbee network is setting up the coordinator device. In this guide, the XBee Grove Development Board connected to the computer assumes the role of coordinator. The coordinator is what establishes and hosts the Zigbee network, and is also what we’ll use to receive network data from the Arduino Due end node.

The coordinator’s network is determined by a configuration provided by the Atmosphere IoT Agent, which also operates as the network gateway to send received data to Atmosphere. To get the network created, we’ll set the configuration for the agent first.

Close the Atmosphere IoT Agent prior to modifying any configurations.

With the Atmosphere IoT Agent configured with the Zigbee settings, it will work alongside a Zigbee application using the specified network ID. Now that the coordinator device is hosting the AtmoIoT Zigbee network, it will receive data from any end nodes connected to the network. The next step is to create the project for the Arduino Due as an end node to send data to the network.

Navigate to Atmosphere Studio from the side menu. When you visit Studio for the first time in a session, you are brought to the Studio Projects screen.

This opens a new project in Studio.

The first aspect of building this sample project is adding elements to the Embedded tab to create the project’s embedded firmware. This involves setting an interval to run every second, and when run initiates a counter to increment an integer value.

That wraps up the first aspect of the project within the Embedded tab. To this point, an interval has been set that will run every second, and when run will increment a value starting at 0 from the counter element. When the counter reaches 10, the counter will rollover back to 0. 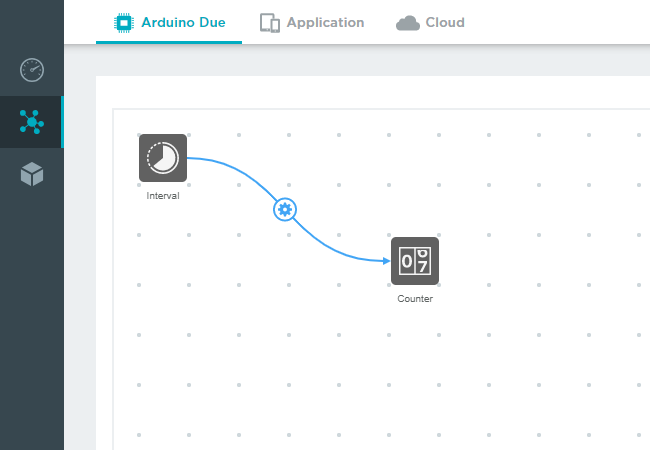 The second aspect of building this sample project is enabling it to communicate to a Zigbee network. This involves adding an XBee3 Zigbee element from the Element Library into the project and configuring it to broadcast to the AtmoIoT network.

With the XBee3 Zigbee element set up, the Arduino Due can identify as an end node device on the AtmoIoT network.

The last aspect of building this sample project is enabling it for cloud connectivity. This is done on both the Embedded and Cloud tabs.

That’s all for creating the project! With the added cloud connectivity, the project will send the integer value from the Embedded tab to the Cloud tab through a Device Event element, where it’s connected to a cloud storage element to store the data on Atmosphere. Overall, the integer value will be sent by the Arduino Due over the AtmoIoT Zigbee network, where it’s received by the XBee Grove Development Board. The received data is then sent to Atmosphere via the Atmosphere IoT Agent.

Step 6 of 8: Program Firmware into the Device

With the project complete, your Arduino Due is ready to be programmed with its embedded firmware.

Prior to programming, ensure you have the following configuration:

With setup complete, you can program the board:

Step 7 of 8: Register the Device

With firmware installed, the Arduino Due can now be recognized and connected to Atmosphere. Prior to connecting a device, ensure the Atmosphere IoT Agent is running in your system tray. This is needed to check your computer’s communication ports for a device it recognizes, which will find the Arduino Due.

To register the Arduino Due:

The device is now registered to Atmosphere and is displayed on the page, and its application starts running. At this point the integer data is being sent from the Arduino Due to the XBee Grove Development board connected to your computer, which is then sent to Atmosphere through the Atmosphere IoT Agent.

Now that the device’s data is sent to Atmosphere, let’s view it through one of the many device dashboard widgets available. In this guide we’ll use a data glance to display the numerical value and view it increment. We’ll do this directly on the device’s console page itself, so click on the newly-added Arduino Due to enter its console. 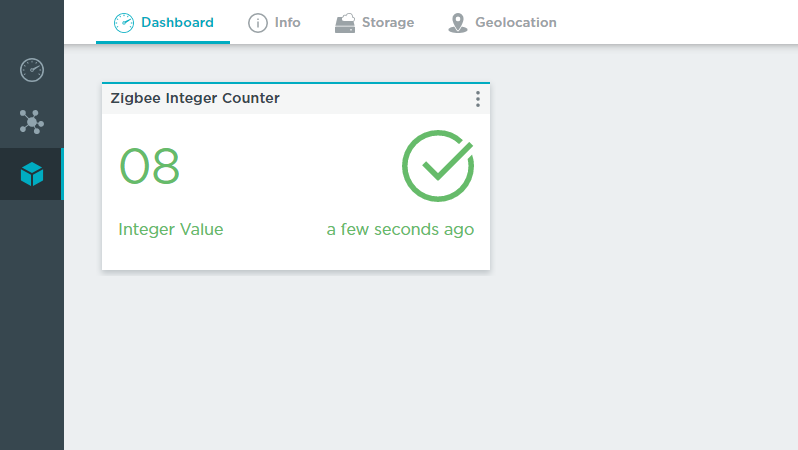 Now that you’ve seen an example on how a Zigbee network is created with Atmosphere, it’s recommended you try this approach using multiple end nodes. The Digi XBee3 Zigbee Mesh Kit comes with a third available XBee Grove Development Board, so consider building another project to use that board as an end node that sends data to the network as well.

In addition to the steps detailed in this guide, a second method for creating and hosting a Zigbee network on Atmosphere is available. This involves connecting the coordinator device to a development board that uses its own connectivity for sending data to Atmosphere.

If you’re interested in building a Zigbee application that sends data between multiple boards, the Creating a Zigbee Mesh Network with Atmosphere guide provides a simple walkthrough for doing so.