The AVR-IoT WG is a Wi-Fi development board from Microchip based on the ATmega4808 AVR microcontroller and uses the WINC1510 Wi-Fi SmartConnect IoT module. The board features onboard sensors for measuring ambient temperature and ambient light.

As is standard with any project type that uses Wi-Fi, cloud elements are accessible from both the Embedded and Application tabs in Atmosphere Studio.

Some devices may have limitations or design restrictions that cause unexpected behavior when used with Atmosphere. Specific information and details pertaining to the AVR-IoT WG and its performance on Atmosphere is noted below.

The Wi-Fi LED will turn on once the Wi-Fi driver has been initialized. This is a good indicator that the board is on and running properly. The CONN LED will be solid if the AVR-IoT WG is in station mode and connected to an access point.

Hold SW0 while powering on the board until the Wi-Fi LED turns on. This will erase Atmosphere provisioning data, putting the device back into provisioning mode.

All pins can be used as general purpose input/output (GPIO) unless otherwise specified.

Below is information regarding the AVR-IoT WG’s exposed peripherals.

This I2C bus is exposed via the P_SDA and P_SCL pins on the click connector.

This SPI bus is exposed via the P_SDO, P_SDI, and P_SCK pins on the click connector.

This UART is exposed via the USB connector as well as the P_UART_RX and P_UART_TX pins on the click connector.

Programming the AVR-IoT WG involves downloading its project firmware from Atmosphere Studio and directly transferring it to the device over USB.

Prior to programming a AVR-IoT WG, ensure you have the following setup configuration:

With setup complete, you can program the AVR-IoT WG:

The blue LED will then turn on, followed by the yellow LED. This indicates the device is programmed with the project’s embedded firmware.

Get started using the AVR-IoT WG with Atmosphere by walking through the following guides:

Atmosphere includes a variety of AVR-IoT WG demo projects for users of all levels. Check them out by clicking the demo’s name to open the project in Atmosphere.

The Atmosphere video library contains the following videos on the AVR-IoT WG:

The following additional resources and downloadable files are available for the AVR-IoT WG: 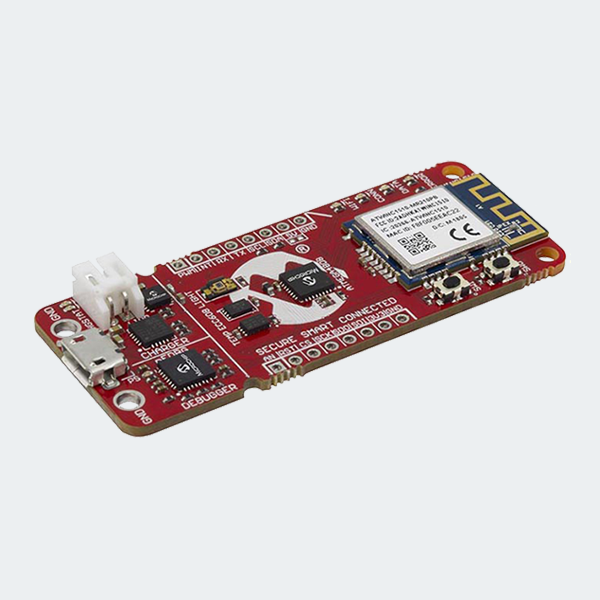