Devices can be provided additional meta information within their Atmosphere Studio projects to acquire various states. This is helpful in setting and determining device conditions, creating monitoring limits, and when analyzing patterns in data.

Devices in Atmosphere have five potential states, along with a sixth state (“None”) that is the default for all devices until they have a status set or changed. Device status is based on the following priority order, listed from highest to lowest:

Devices that don’t have a status (“None”) are considered to be the lowest priority. If a device has a status set, the state is indicated by the respective status icon on that device’s entry in the grid or table. Devices may be sorted by priority order within the table by selecting the table’s Status column header. 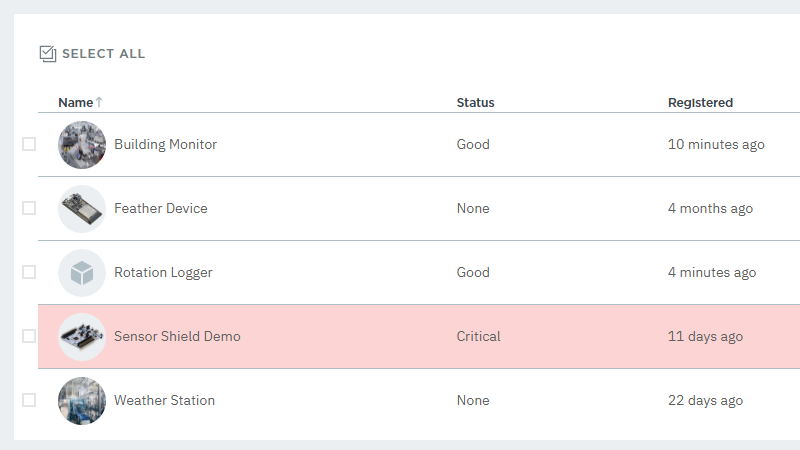 The missing, critical, and warning statuses are considered negative states, and are further represented by a corresponding background color to draw additional attention to devices that acquire these states.

If a device acquires a status, it maintains that state until a condition is met that either reverts that status or to sets it to something else. Both reception and removal of a status are determined by the logic set within the device’s Atmosphere project itself.

There are currently no methods native to the platform to manually force a status change, however you can build such logic into a project through the Application tab and app interface. There are several ways of incorporating this, but one simple solution for developing a manual option to modify a status is using an interactive element (such as a button) connected to a Device Event element, that may trigger a status change on the cloud if the button is pressed within the app.